The Nerf Event of the Year is finally here! 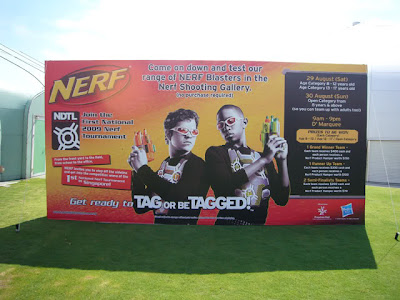 This official Nerf Tournament is organised by Hasbro and the event is held at Downtown East D'Marquee, Singapore.

All Tournament players are equipped with the new Nerf Furyfire, along with dart tag vests and protective eyewear. All equipment is supplied by the organiser. Each team comprises of 4 players.

The Tournament runs on a Capture-The-Flag style gameplay with layers of target objectives. Team points are scored by a combination of flag capture, target board hits and player hits.

Tournament players have to hit their designated mid-field target before they can enter into the opponent's area, and then hit the opposing team's zone target before being allowed to capture the flag.

Teams compete against each other to accumulate scores for podium wins and grand prizes!


Big Thanks to Hasbro for organising this official tournament, it was indeed a great event for Nerf Enthusiasts in Singapore! :)
Email ThisBlogThis!Share to TwitterShare to FacebookShare to Pinterest
Posted by SG Nerf at 9:30 PM 5 comments

The Nerf Furyfire is the standard blaster used in Nerf Dart Tag League (NDTL) Tournaments held during the Dew Tour 2009 in the USA.

This blaster features pump-action priming, an auto-advancing barrel and 10-dart ammo capacity. Its form factor is slightly bulkier than the Nerf Maverick but it is still compact enough to be very maneuverable in close quarter Nerf games.

Its trigger auto-advances the barrel. Unlike the Maverick, the Furyfire's barrel does not flip out for dart loading, it is reloaded by pulling the trigger and loading in the foam darts individually.

The package comes with 2 pairs of vision eyewear, 2 sets of dart tag vests and 20 Tagger foam darts (10 for each blaster). The Furyfire is compatible with all Nerf foam darts too.

The Furyfire's pump-action mechanism and front barrel assembly is quite solid, so it should be able to withstand the rigors of outdoor Nerf game usage. The average firing range is around 25-30 ft. 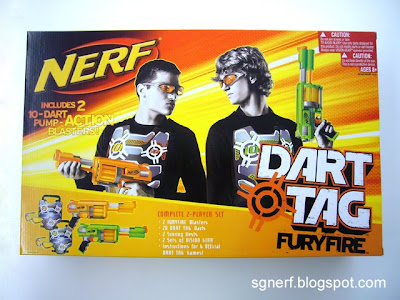 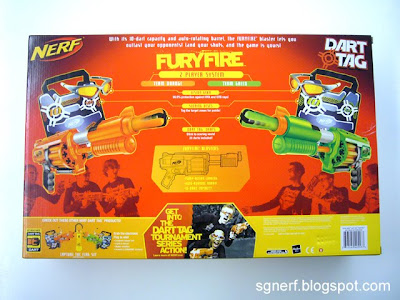 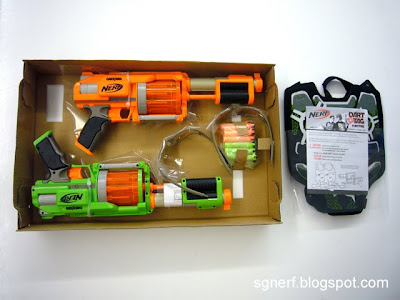 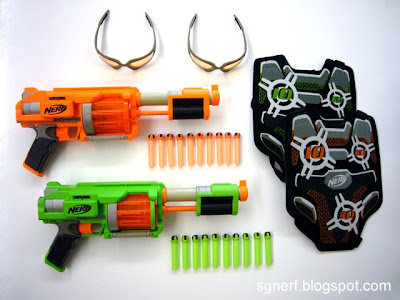 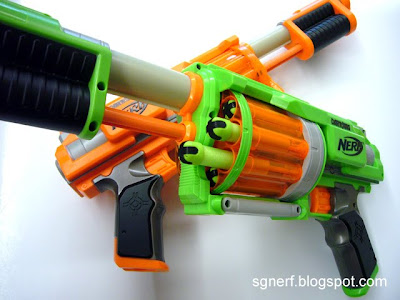 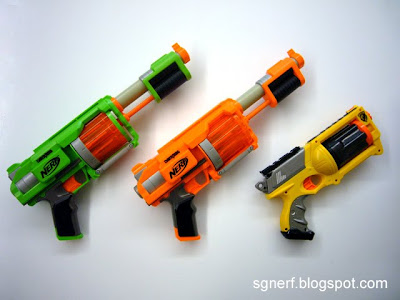 Email ThisBlogThis!Share to TwitterShare to FacebookShare to Pinterest
Posted by SG Nerf at 6:30 PM 40 comments 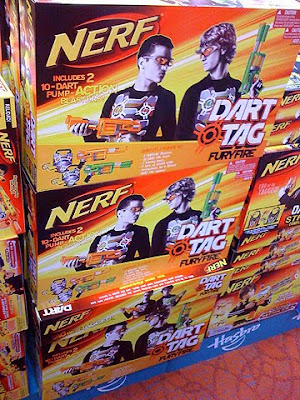 Email ThisBlogThis!Share to TwitterShare to FacebookShare to Pinterest
Posted by SG Nerf at 3:00 PM 3 comments

Next up, the classic predecessor to the ever popular Nerf Magstrike...

The Nerf Powerclip was launched back in 1999 and its now no longer in production. This blaster quickly became a hot favorite amongst Nerf enthusiasts and collectors. Imagine... 10 years ago, Nerf players were already utilizing its amazingly high rate-of-fire in Nerf games!

The Powerclip has a similar firing system as the Magstrike, but was designed with a more sci-fi look. In addition, it featured a cool tinted transparent cover which allowed the easy viewing of its internal mechanisms.

Same as the Magstrike, it uses an auto-advancing 10-dart clip which is fired by a repeating air/spring plunger mechanism, powered by compressed air from its air bladder system. The main difference is that the Powerclip's clip is not removable.

Due to the Powerclip having an air bladder compartment situated at the center of its casing, it has a more compact form factor than the Magstrike, this makes it abit easier to transport around and carry during nerf games. But as a slight trade-off, this design could also make the Powerclip abit too front heavy for some users, as it lacks the counter balance of the Magstrike's extended air bladder compartment stock.

Firing range and speed are around the same as a Magstrike, averaging at the 30+ ft range and firing at an awesome rate of 5 rounds per second! And it is compatible with all Nerf foam darts too. 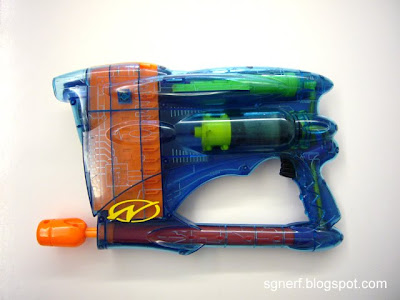 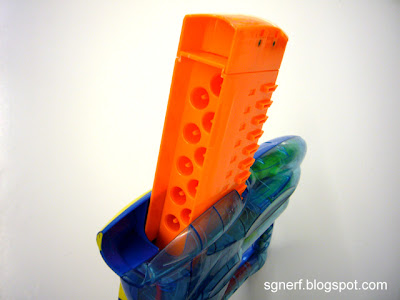 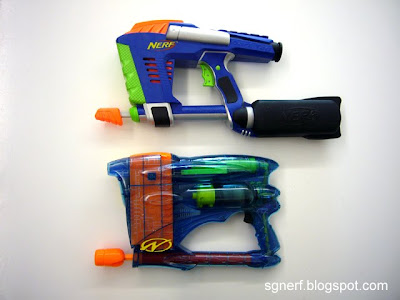 Imho, the Powerclip is a truly incredible feat of blaster design... even more so knowing that it was released 10 years ago! :)
Email ThisBlogThis!Share to TwitterShare to FacebookShare to Pinterest
Posted by SG Nerf at 3:32 PM 7 comments

Lets look at some classic Nerf blasters that are getting rarer by the day...

This blaster was launched back in 2003 and its quite a rare find nowadays. While it might be viewed by some as having a rather "old-school" design, it seems to be a blaster that still remains popular amongst many nerf collectors and enthusiasts.

The Nerf Air Tech 2000 operates as a compact air tank based blaster. An average of 4-5 pumps is recommended to fill up its air tank before each shot.

The Air Tech model range feature the "Liquitron Power Gauge", containing unknown goo that fills up as air is pumped into the air tank. Yeah, i know... its a very cheesy gimmick. :p

This firing procedure results in a rather slow rate-of-fire (RoF), but its main redeeming quality is its excellent firing range. I have test fired it with 4-5 pumps before each shot, and it consistently achieved an average firing range of around 40-45 ft with Tagger foam darts.

More pumps before each shot can yield further firing distances. At 8-9 pumps, i measured foam darts reaching the 55-60 ft range!

In addition, it is compatible with most of the common types of Nerf foam darts too! 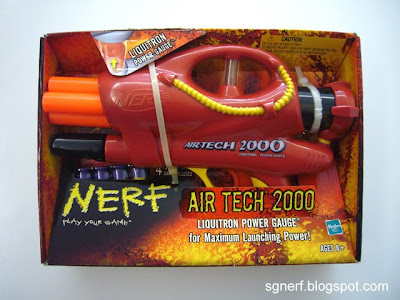 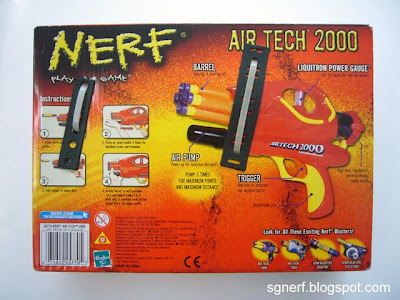 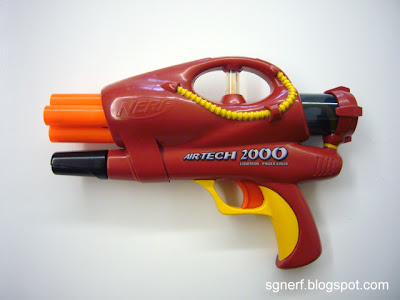 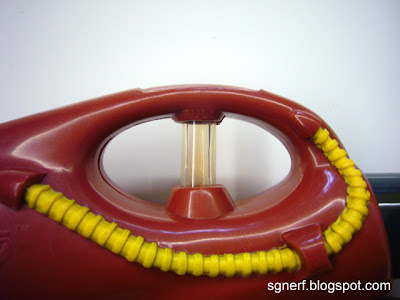 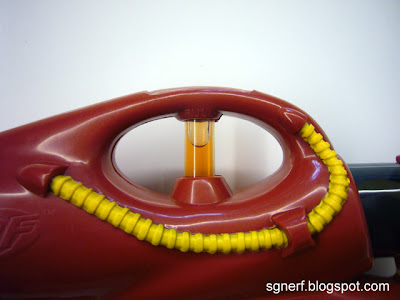 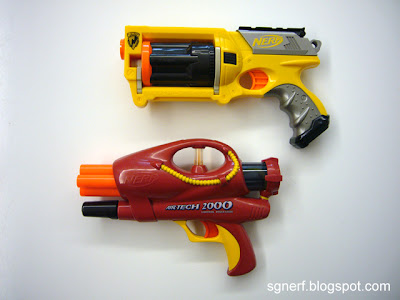 If you are looking for a compact blaster with alot of "punch" and don't mind a slower RoF, the Air Tech 2000 could be the blaster for you! :)
Email ThisBlogThis!Share to TwitterShare to FacebookShare to Pinterest
Posted by SG Nerf at 7:30 PM 16 comments

The New Paper (A local news paper in Singapore) has published a News Article on the Nerf hobby and NerfSG community! 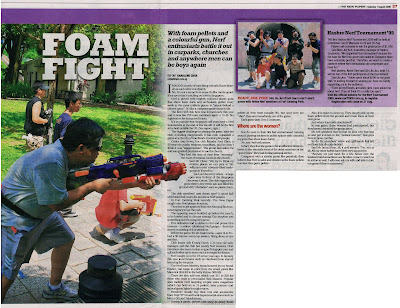 Email ThisBlogThis!Share to TwitterShare to FacebookShare to Pinterest
Posted by SG Nerf at 4:04 PM 3 comments