From the layout of the foam darts as seen through the drum mag's clear panel in the photo, my theory on how it could work is more like a horizontal "S-shaped" ammo feed flow (therefore it'll work quite differently from a Beta C-Mag).

Its just my own theory though... i've not spotted any confirmed info on how it actually works yet.

Official sources have confirmed that it was only a concept that was never produced.

Still... i guess its an idea that would have been quite interesting to see in operation. :)

Urban Taggers has spotted a photo from toy hobby website Mouse Droid which showed a photo from the 2011 Australian Toy Fair Nerf booth that had a Nerf Stampede ECS-50 box sitting on a bottom shelf in the back ground, check it out: 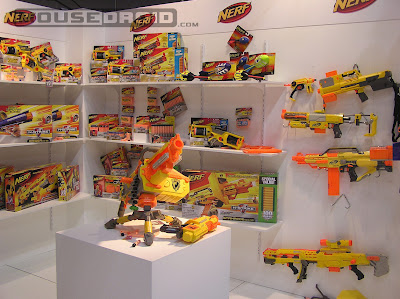 Once again, official sources have confirmed that it was still only a concept with no plans for production.

The box on display at the 2011 Australian Toy Fair Nerf booth was just meant to show retailers how the bonus pack looks like, not meant to show the Stampede ECS-50 concept.
Email ThisBlogThis!Share to TwitterShare to FacebookShare to Pinterest
Posted by SG Nerf at 9:00 PM 64 comments

The Nerf Longshot CS-6 (Yellow version) has popped back in stock at local stores in Singapore.

This stack of boxes were spotted at Metro Paragon. 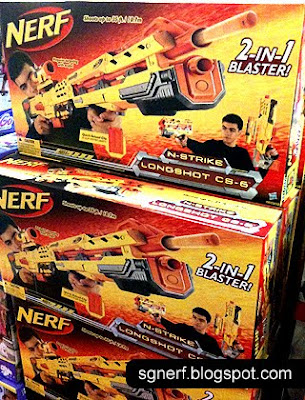 Retail sources mention that they are a limited one time re-stock... so get them while stocks last! :)
Email ThisBlogThis!Share to TwitterShare to FacebookShare to Pinterest
Posted by SG Nerf at 9:00 PM 89 comments

Target USA has them in stock now, here are some photos of this new model variant. 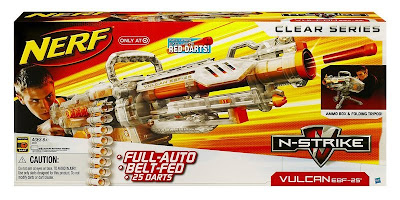 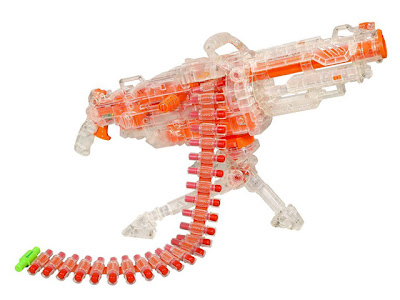 Email ThisBlogThis!Share to TwitterShare to FacebookShare to Pinterest
Posted by SG Nerf at 2:00 PM 33 comments